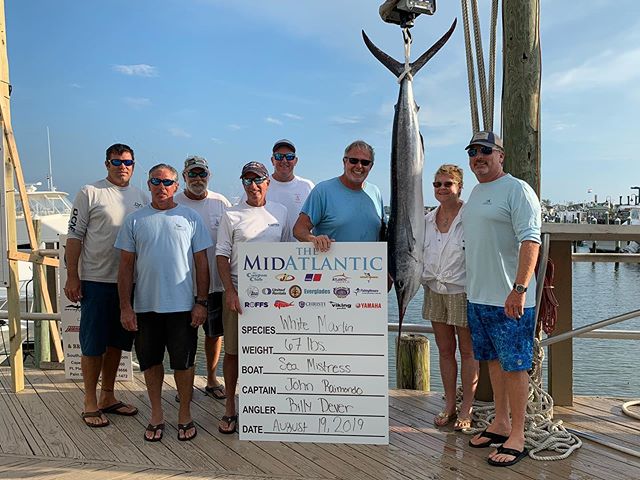 Tournament Record Cash Purse of $3.5 Million Up for Grabs!

Crews were anxious to get offshore on Day One as the 2019 MidAtlantic got off to a busy start with 138 of the 156 boat fleet, including 60 from Canyon Club Resort Marina in Cape May and 78 from Sunset Marina in Ocean City, heading out before daybreak. A light breeze and moderate chop at the canyons was reported and while late afternoon rain may have cleared the beaches of vacationers, it did little to dampen the enthusiasm at the tournament! It was a late night and busy morning for tournament staff compiling the final entry data and while all calcutta entries are still being tabulated a new tournament record cash purse of over $3.5 million is anticipated! This total would mark the sixth consecutive year a record cash purse has been up for grabs at sportfishing’s “Main Event!” Keep in mind with the wide range of calcuttas (side bets) available to all boats often more than three places will be noted during the week as being “in the money.”

The headline story of the day came from Canyon Club Resort Marina in Cape May where Avalon, New Jersey’s John Raimondo weighed a 67-pound white marlin for angler Bill Dever aboard Raimondo’s Sea Mistress. No other qualifying white marlin were weighed at either tournament venue so second and third place remain vacant. Additionally, no qualifying blue marlin were weighed.

In the tuna category, Dem Boys hailing from Isle of Palms, South Carolina weighed a 96-pound yellowfin for Tommy Hancock to take the early lead. Mark Deblasio’s Blue Runner from Manasquan, New Jersey sits in second place with a 79-pound yellowfin. Pat Healey’s Viking 72 based out of New Gretna, New Jersey is currently third with a 72-pound yellowfin.

The scales at both tournament venues saw numerous dolphin and wahoo weighed on Day One and the leaderboard was constantly changing. Currently the heaviest dolphin belongs to Baltimore, Maryland’s Curtis Campbell at 33 pounds caught aboard his Reel Estate. Ed Russo of Carlstadt, New Jersey weighed a 27-pounder from his Big Deal to sit in second place tied with Jamie Diller of Stone Harbor, New Jersey aboard his Canyon Lady. Talkin’ Trash and Joseph Stein III of Marriotsville, Maryland aboard his Marli are tied for third place at 25 pounds.

Ocean City, Maryland’s Thomas Colquhoun aboard his Special Situation leads the wahoo category at 29 pounds followed closely by Hilltown, Pennsylvania’s Andy Schlotter aboard his My Time with a 28-pounder. Currently tied for third heaviest wahoo are Westfield, New Jersey native Walter Koller aboard his Nasty Habit and Todd Willard of Greenville, Delaware aboard his Fish On as both weighed 27-pound ‘hoos on Day One.

Please note the MidAtlantic tournament is a private event. Tournament venues are not open to the general public and require credentials for entry.

For further information contact Tournament Director Aaron Hoffman at 609-884-0177. Be sure to visit the tournament’s official web site at www.themidatlantic.com where you’ll find all the facts, figures and information about this year’s event including a complete rundown of calcutta payouts, rules, points and an event schedule. There’s also a link to purchase official tournament merchandise. Each night you can follow the weigh-in session with live video feed from both marinas via a link on the tournament’s web site. You can also follow all the action on Facebook at The MidAtlantic Tournament; on Twitter; @midatl and on Instagram; @themidatlantictournament.

White Marlin and Tuna Highlight Day Two of the 2019 MidAtlantic